I have enjoyed Doctor Who for the past few years mainly through the DVD releases and audiobooks.  I was was wondering if people here had an interest in the old classic series which began in 1963.  Although I have enjoyed the new series my favorite is the old one. The stories were usually made on a limited budget without  much money, but they still have an endearing quality. There were seven Doctors from 1963 to 1989, beginning with William Hartnell and ending with Sylvester McCoy or eight if you include Paul McGann in the 1996 TV movie. Most of the stories are available on DVD or blu-ray or they may be available through online streaming.  They are from a simpler time so they look very old fashioned and have low budget special effects, but the acting is often great.

Does anyone here enjoy audiobooks of Dr. Who ?  I think of one I listened to just recently, The Age of Endurance with Carole Anne Ford and William Russell.  Carole Anne Ford and WIlliam Russell were the first companions in 1963 (they played Susan and Ian). Their voices are excellent and virtually timeless. Russell did a fine imitation of the first doctor (William Hartnell) in this one. There are other stories featuring Tom Baker, Peter Davison, Sylvester McCoy, and the other Doctors, and all of them are very enjoyable.  They reprise their roles in newly created stories, which are often just as good as the television episodes.  I love the stories of the classic Dr. Who  the best (especially the early historical adventures).  It is like a nostalgic trip to the 1960's and '70's era of Dr. Who.  🙂

As a child we had no TV, so the occasional episodes I saw at other people's homes (mid 60s-early 70s) were special and memorable. My brother and I recited Cybermen phrases to each other for years,"We-will-sur-vi-va!"  I also remember one or two episodes involving Yetis, and one where the Doctor motivated one of his girl companions to get through an escape tunnel by saying how useless and feeble girls were - she immediately proved him 'wrong'.
I lost interest by the time I had my own TV, but became a great fan of the revival in the 2000s.  Lots of DVDs in my collection!

I have never heard an audio book, and don't know whether it is priced low enough for me to buy any. There is a lot of non-central canon that I haven't seen (eg Torchwood), but I'd like to be able to access/stream audio stories. Can anyone suggest sites where I can listen?

@coracle  I have all of my Dr. Who audiobooks on CD.  I prefer the better sound quality over downloads.  Most of the audio adventures are around $20 for the two hour dramas on the double CD's, which isn't that expensive.  Amazon has both formats, and eBay has many of the older CD's.

I have a lot of Dr. Who DVD's and only one blu-ray set of Tom Baker Season One.  I don't notice much difference on 40-inch screen between the high and regular definition.  The blu-rays have nice bonus features, but it is very expensive to replace DVD's unless you buy only one set.  I think the old video looks quite good and the restoration is excellent.  A number of the lost episodes from the first two doctors (William Hartnell and Patrick Troughton have been animated to look much like the 1960's.  They are well worth viewing.  🙂

Thanks.I must see what some of my friends have. I'm not in USA so the $20 cost will be $30 plus postage here.

Our  TV options were limited when I was growing up, so I only occasionally caught Doctor Who episodes. However, I did see a number of episodes with Tom Baker as the Fourth Doctor - before I saw the BBC Narnia productions.  So, unlike some friends who said "Puddleglum is playing Doctor Who," my response was the opposite.

I had access to BBC America for the new series, and watched it regularly until early in Peter Capaldi's tenure, when I moved and no longer had easy access to the program. I've seen very few of the episodes since then.

@stargazer Tom Baker is often regarded as the best Doctor.  About ten years ago I ordered a DVD of “The Sontaran Experiment “ and after watching it for the first time, I was hooked.  It was a Tom Baker story, and I really loved his acting.  Although Dr. Who was shown on my local PBS station in the 1980’s it was on Saturday afternoons (when many people are gone) and only one episode was shown at a time. It’s better to watch the whole story in one sitting as the episodes are on the DVD’s.

Did anyone see The Doctors Revisited, a series which was broadcast on the cable network BBC America?  This was during the 50th anniversary of Dr. Who in 2013.  It featured one complete story from each Doctor, and some of the episodes had not been shown on TV in many years.  The series is available on DVD and is well worth viewing and purchasing if you are a Whovian. .  I have the set of the Doctors 5 - 8, although stories from the first eleven doctors are included in the three sets.  I believe all three of the sets are still available.  I wish BBC America would broadcast the vintage programs again since they have been airing the new series quite often.  🙂 Doctor Who was always on when I was growing up. I have a vague memory of Cybermen coming out of the London sewers around 1968. But it was during Jon Pertwee's era (the Third Doctor, 1970 - 74) that I was old enough to follow the stories. Pertwee is still THE Doctor to me. I wasn't so keen on Tom Baker in the role and I stopped watching the programme for a couple of years around 1977 - 78, but I was pleased when Peter Davison took over in 1981. Colin Baker could have been good but by 1986 the scripts were mostly abysmal, and Sylvester McCoy didn't seem to have the authority the part needed, so I didn't cry buckets when the show was cancelled in 1989. I really liked Paul McGann as the Eighth Doctor in the TV movie from 1996 and it was a pity we didn't see any more of him, other than about ten minutes in The Night Of The Doctor in 2013. I've liked the new series since it began in 2005, though it took me about three episodes before I was convinced - I was worried they would just send the show up, especially with the belching wheelie bins in the first episode (Rose). I get really irritated when so-called fans constantly berate the programme these days, because they don't like a female Doctor or they think that the Timeless Child revelation has totally destroyed the series. I've maybe a dozen DVDs, a couple of audio stories from Big Finish and a couple of books, but I don't go in for subsidiary media much because it's expensive.

In preparation for the 50th anniversary, I watched every classic episode I could get my hands on, which was a pretty impressive list. The local library system kept me well supplied. I tried watching them in order whenever I could, and if a story was missing, I'd read the synopsis. It was fun to dive into that bit of television history. My favorite episodes were probably the episodes on Peladon.

I've listened to several of the audio dramas. Most recently, I listened to stories starring John Hurt as the War Doctor. He reminds me of the classic doctors, though I can't put my finger on why. I also own The Light at the End, which was Big Finish's audio drama contribution to the 50th-anniversary specials. It was fun to hear the various doctors interacting with each other.

I suppose I would have to say that the Daleks are my favorite villains in the series, but there is something captivating about the Ice Warriors as well.

Anyone else have a favorite villain from the series?

I also own The Light at the End and enjoy it very much.  I usually will buy the audiobooks which have the Doctors from the old series (especially the early adventures).   As for the new series, I think Peter Capaldi is the most like the old Doctors. Occasionally the new series is like the old, but I prefer the old one for its vintage quality, which is something that the new series mostly does not have.  I like many of the plots of the old stories better, e.g., The Talons of Weng Chiang and Terror of the Zygons, which featured Tom Baker as the Doctor.

The best villain was probably the Master, played by Roger Delgado. Unfortunately he is no longer with us, nor is Anthony Ainley, who was also quite good. Although other actors have played the Master, I think the first two are the most memorable.

The Jon Pertwee and Tom Baker eras were the golden age of Dr. Who, and Patrick Troughton was such a fine actor.  Frazer Hines and Peter Purves have done fine imitations of Troughton and William Hartnell on audio. The classic series is reprised through the return of those fine actors after so many years. Those are the Dr. Who audiobooks that I like the best.

Incidentally, it was just announced today that Christopher Eccleston will be reprising his role as The Doctor in some audio dramas next year.

I thought Derek Jacobi made a fine "Master" as well. I am a bit partial to Jacobi in general though.

@risto  Of the new series Doctors I liked David Tennant and Matt Smith much better than Christopher Eccleston. It seemed like they enjoyed the role of the Doctor much more, and it fit their personalities better.   And that's probably the reason why they stayed much longer in the series.  Of course the best Doctor in my view was Tom Baker. He was naturally gifted in playing the role. In an interview many years ago I believe he said that he actually was Dr. Who (he wasn't acting).  So I guess he actually became the role that he played.  🙂

I'm not a huge fan of Doctor Who (though my dad and my sister are), but I came across this snippet a while ago and couldn't stop laughing... 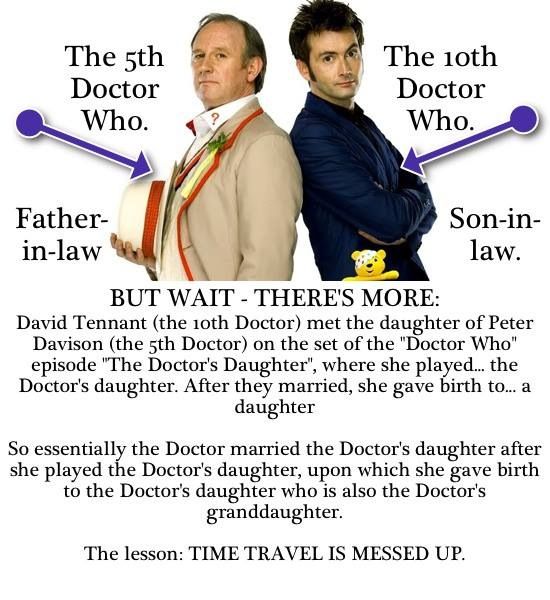 Oh yes, and possibly the best ever cover of the theme tune, with an Aussie twist...

I have been enjoying The Trial of a Time Lord with Colin Baker as Dr. Who.  Some people do not like Colin Baker as Doctor Who, but I didn’t think he was too bad.  The four stories in the arc were quite interesting, and I am glad that I bought the set on blu-ray.  Some parts of the serial were quite dark and frightening, e.g. the transformation and apparent death of Peri, who was one of the Doctor’s companions.  The set has a really beautiful restored picture and sound quality, considering that the series was made in the 1980’s on a small budget. I love the quaintness and the filming locations, which were often in the parks of rural England. It is old school science fiction, and that’s the way I like it.  🙂