Forums
Narnia Movie Discus...
Narnian Merchandise
The Horse and His B...

The Horse and His Boy miniature fan

I found this on Etsy (I do a search for "Narnia" there every now and again!) and just had to have it — it was a very reasonable price (sold by an antiques seller here in the UK) and it's clearly hand-painted and presumably unique. It's a painting on a miniature fan, very delicately done with fine details and beautiful little gold highlights. It looks rather like a traditional Chinese or Japanese painting — two figures on horseback going at a wild gallop with the horses' manes and tails streaming — which could just be an imaginative work of art, until you read the handwritten title on the back:

The artist's name is on the back (with the date 1997), but it's hard to read exactly — someone's written in "Faith Bronner?" above it, but it looks more like "Father Bronner" to me. (The seller didn't know either, so I suppose it will always remain a mystery.)

Anyway, it captures that famous scene so well and I just love it!! (Well, my one complaint is that Shasta has such long hair that he looks more like a girl, but I suppose we could surmise that he'd been on his journey for a few weeks by then and it was a while since he'd last had a haircut...

Here are a few photos so you can see it — these are by the seller, Jacqui Inglis, from the Etsy website, as I don't think I can take better ones myself. 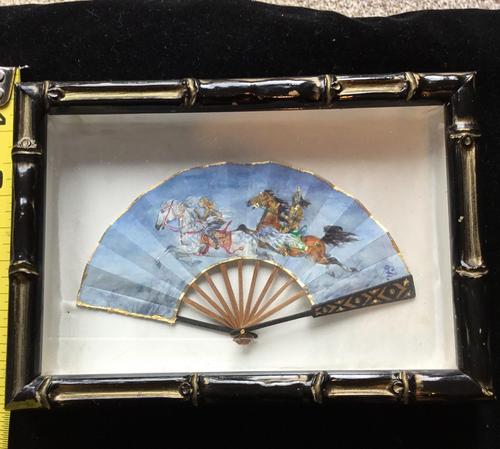 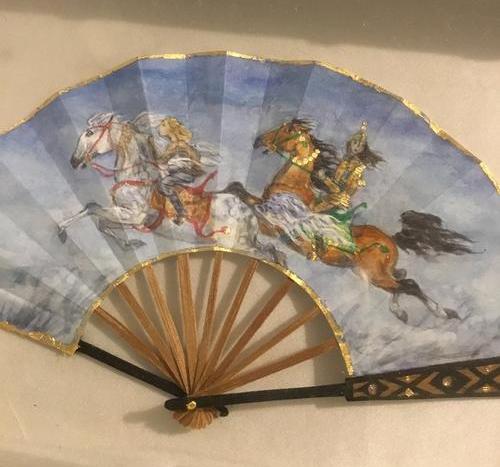 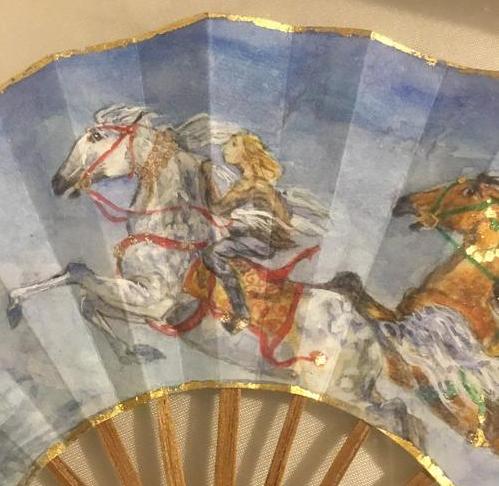 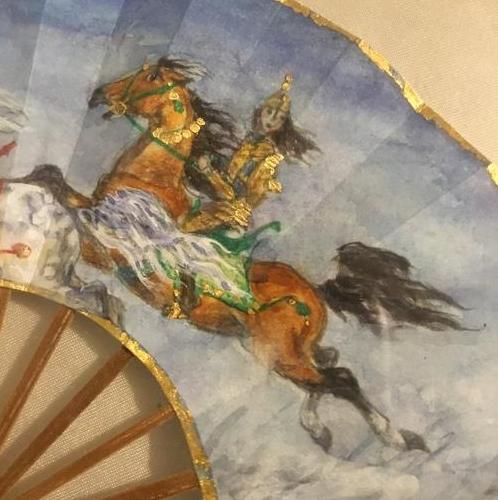 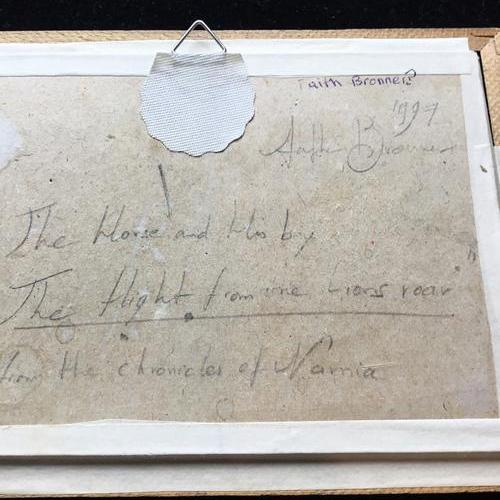 Many thanks to Jacqui and I will treasure this little artwork — apart from it being beautiful to look at, I take it as a reminder that sometimes, even when we think we're being pursued by danger and fleeing in terror, it's actually Aslan guiding us all along...

That's so cool Courtenay! Congratulations!
I wish I could say I knew more about that artist- it's just not every day you come across stuff like that... though if the name is really "Father" Bronner, I'd wonder if more than one of these was being made in a monastery somewhere....

Thanks, Cleander. I should add that when I say "miniature fan" I mean really miniature — the frame it's set in is about 7 x 5 inches, so the fan itself is even smaller!! It looks even better in reality than it does in the photos, as they enlarge the artwork so much that they blur it slightly. If the name is really "Father" Bronner, I'd wonder if more than one of these was being made in a monastery somewhere....

That was almost my thought. Reading your comment brought my idea out of the woodwork! It sounds 'very Narnian' to have monks or nuns in a monastery making artwork that could also be... useful. It is a fan after all!

This post was modified 2 months ago by Jonathan Paravel

Evacuating London and The Battle by Harry Gregson-Williams are some of the best film score ever written.
I too was changed when I met the Lion.