I've been thinking about how effective the costume design for the Lord of the Rings movies was... to this day, there is a style of dress that comes to mind when you think of LotR, trademarked by the trailing sleeves. I would love it if Netflix's adaptation inspires an idea of a Narnian dress; that the costumes of Narnia have a truly distinctive look instead of "run-of-the-mill medieval fantasy." (There are already so many of those!)

How would they achieve this? I'm not exactly sure.

I do think there are a lot of cultural influences within Narnia for a costume designer to play with, beyond the familiar medieval attire:

As much as I love many of the costumes from the Walden movies, Netflix only drawing inspiration from the medieval ages of our world feels like a misstep. We know Mrs. Beaver has a sewing machine, for instance, which is a huge technological leap. The collapsible umbrella is a surprisingly old invention, but according to my research

they weren't a typical medieval accessory for men in Europe and didn't become popular in England until after the 1700s, which gives Tumnus a more 1800s aesthetic. And if Disney's Cinderella taught me anything, it's that mice and birds can really put the finishing touches on a dress.

I recently ran across this ballgown (larger image here) from 1905-1910 that belonged to Queen Maud of Norway, and while I'm not saying that Narnia style should be like it specifically, I was really struck by it — I don't think I've seen anything quite like it before. I can definitely imagine Queen Helen wearing something like it at her coronation: 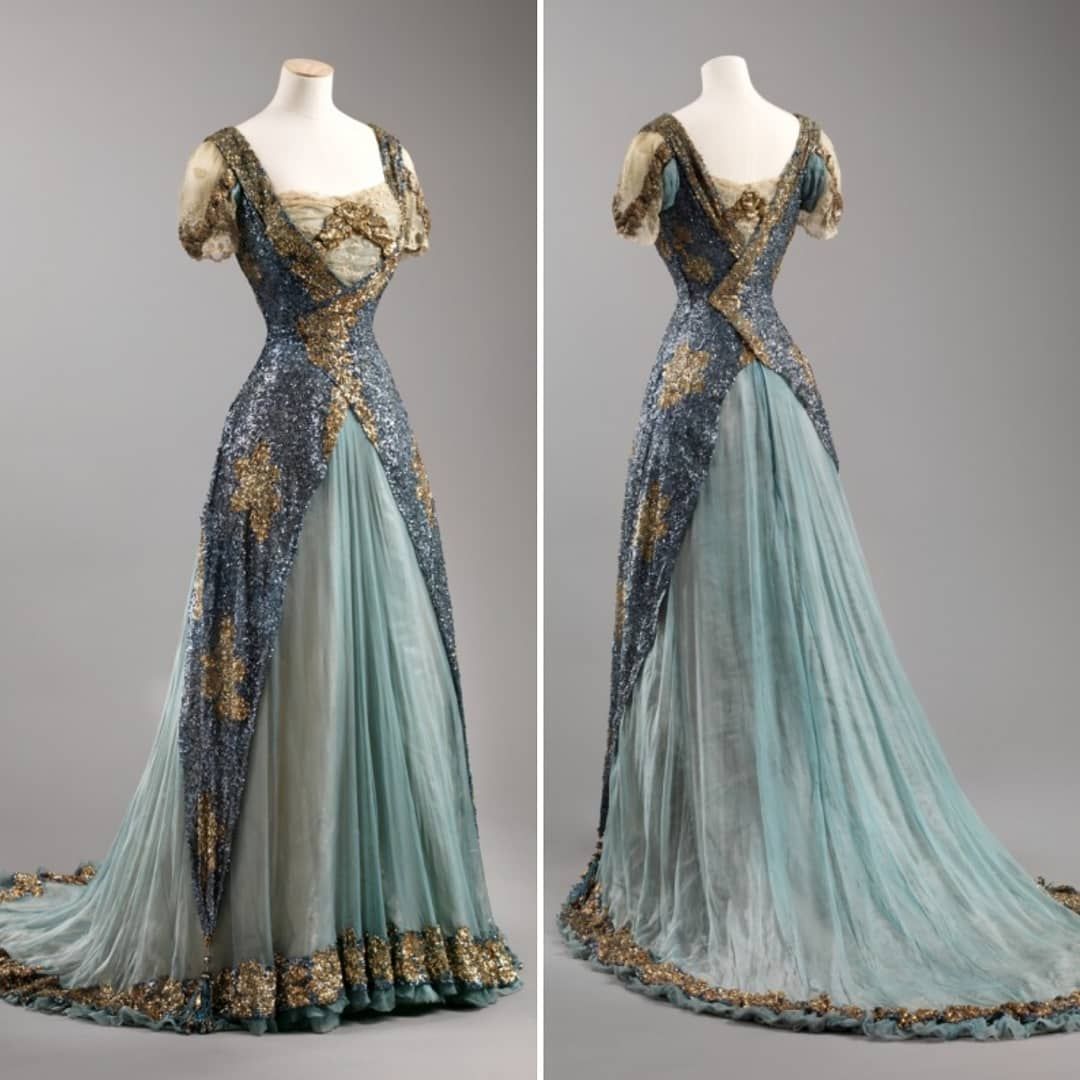 I do think there are a lot of cultural influences within Narnia for a costume designer to play with, beyond the familiar medieval attire:

I like this idea of incorporating different styles!  When I think of Narnian clothing, I think of comfort and practicality, elegance and simplicity (if memory serves correctly, I think that it is stated that Narnian clothes are more comfortable than Calormene ones).  There is an inherent lightness and joy imbued in Narnia, and I think that this should present in the clothing, too.  This would draw a sharp contrast when compared to the elaborate opulence of Calormene fashion or the crude garishness of Harfang’s attire or the somber heaviness of Telmarine dress.  (I personally view Archenland a having more a strictly medieval influence with maybe a touch of Eastern influence, given that they are closer to Calormen).  I imagine Narnian dress (for the humans, at least) to be light and flowing with draping (Greco-Roman influence) while having the silhouette, structure, and sleeves of Victorian/Edwardian fashion.  There could even medical influence with the occasional belt, tunic, longer sleeves, square necklines, and split skirts.  I think Narnia should also have multiple stylistic variations using these influences, as it would reflect the diversity of the Narnian populace.  I think the color palette should be earthy and vibrant but not gaudy or over saturated to the point of garishness.

I recently ran across this ballgown (larger image here) from 1905-1910 that belonged to Queen   Maud of Norway, and while I'm not saying that Narnia style should be like it specifically, I was really struck by it — I don't think I've never really seen anything like it before. I can definitely imagine Queen Helen wearing something like it at her coronation:

Queen Maud of Norway’s gown looks absolutely beautiful, and her coronation gown is in a similar style—both of which I could see Queen Helen wearing.  I especially like late-Victorian, early-Edwardian silhouette.  As for the mythological beings, I could see the naiads, dryads, and wood/water gods should having a wardrobe with heavy Greco-Roman influences.

I think that Netflix should portray a shift in Narnian fashion over time.  This would be a bold step and a bit of a risk, but I think that it would be another layer that would add to the world building and show the passage of time.  For example, in MN, show a wardrobe with heavy Victorian/Edwardian influence (perhaps with a bit of Medieval thrown in, too).  Then, when the Pevensies are crowned in LWW, a blend of Greco-Roman, Edwardian, and Medieval to show the rich blend of cultural influences at the peak of the Golden Age.  PC and VDT’s clothes could add Telmarine influences into the mix, as the Telmarines occupied Narnia for quite some time and would have had a large influence on Narnian fashion.  This influence could still be seen in SC (but it would be fading) and all but gone by LB.

Edit: This picture of Edwardian tea gowns I could see being fairly easy to blend with Greco-Roman styles, as they don’t have over-the-top sleeves or wasp-waisted silhouettes I’ve seen in a lot of late-Victorian dress.  Then again, the style of the draping and layering combined with those particular shades of red and purple, I could also see incorporated in Calormene fashion.