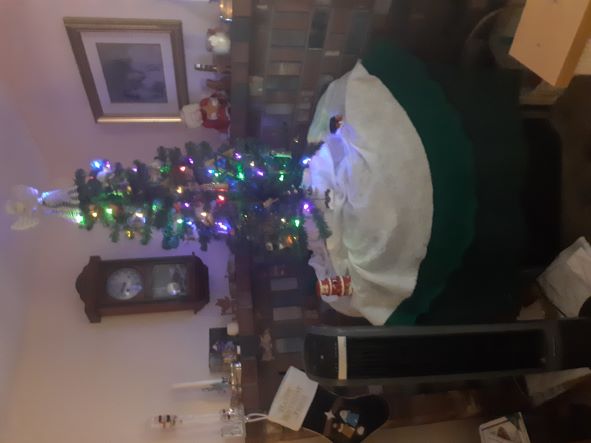 I also have a Charlie Brown tree in my room. 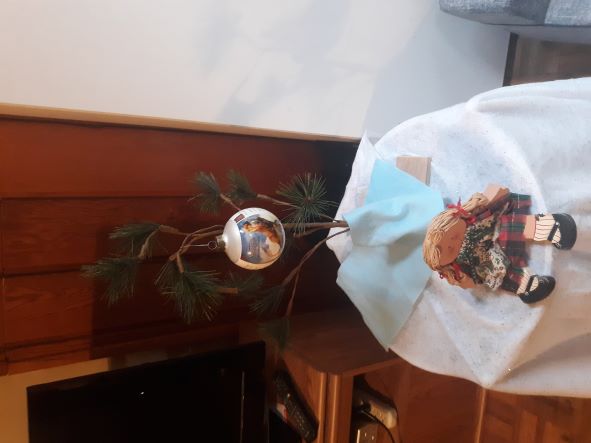 And we got a wreath hanging. 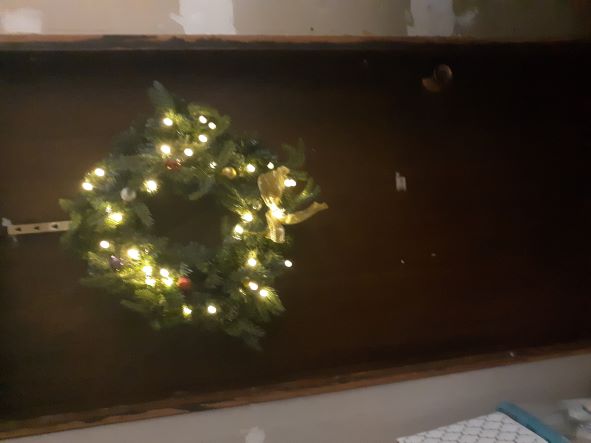 We even have bells on the backdoor. 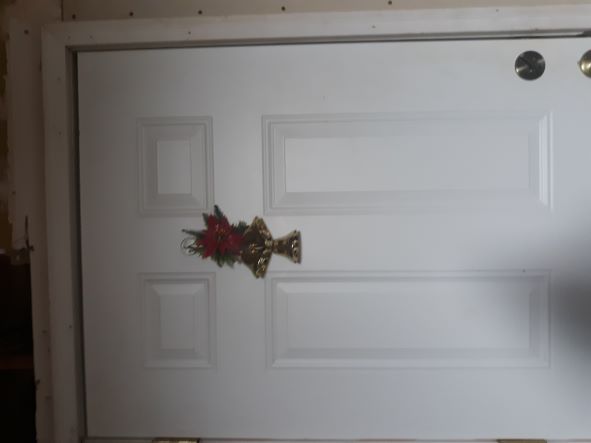 We also have a nativity set. 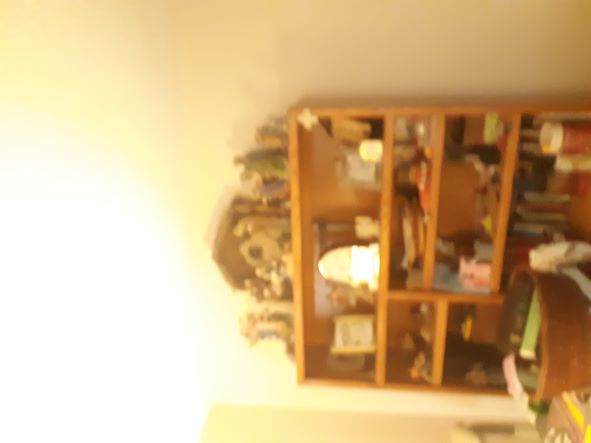 Anyone getting decked out for Christmas?

For the first time ever my husband and I took our kiddos to get a Christmas tree from Lowes the weekend after Thanksgiving. We've never been so on top of things before LOL! My kids decorated the tree (the bottom 3' was fully loaded with ornaments and the top half was quite sparse

) and I put up my favorite Nativity set. My husband got the lights on the outside of the house, so yeah! We did manage to decorate.

One thing we did differently this year is set up our tree in the basement instead of the living room. We did it for multiple reasons, and I think I quite like it down there.

This morning I took down the box of Christmas decorations from a high shelf in the cupboard. It marks the start of Christmassy things for me, as the first things I wanted were my beloved cardboard Advent calendars. One that I've had for decades (!) has little doors that open with a bible verse on the flap and a picture of that part of the nativity account 'inside'. The newest one was sent to me as a Christmas card, three years ago, by my dear aunt who died the following year. She used to be first with her card posting, so I will continue displaying this advent calendar-card. The third advent calendar is one I bought more recently; like the others it is a nativity scene, and does not contain edible items!
(honestly, what are parents teaching their kids when they buy them a superhero advent calendar with chocolate on each day? - that Christmas is about Batman or Superman and eating chocolate?)

This year we have white lights on our Christmas tree, it looks very pretty with all of our ornaments. We have a several mini Christmas trees that are scattered around the house, most of them just have lights, but one does have some small ornaments on it.

We put the colored lights on the bannister, 450 of them.

And then the stockings are also hanging from the bannister.

Our Precious Moments Nativity is on top of my great-great-granddad's bookcase next to my dad's ESV Reader's Bible.

@coracle I have an advent calendar like that. I also have one where you put a different bulb magnetically for each different day. This year, I am doing one with a different tea each day.

The third advent calendar is one I bought more recently; like the others it is a nativity scene, and does not contain edible items!
(honestly, what are parents teaching their kids when they buy them a superhero advent calendar with chocolate on each day? - that Christmas is about Batman or Superman and eating chocolate?)

For the last few years I've been buying one called "The Real Advent Calendar" — which has the Christmas story in it, told in short form behind each cardboard flap, and in somewhat longer form in the accompanying booklet, as well as a chocolate for each day! Of course I know the story pretty well by now, but the illustrations are lovely, the booklet has a few little fun puzzles (like a word search or a crossword), and it's produced by an organisation that supports charitable projects in Africa and the Middle East. They do a "Real Easter Egg" every year with an Easter story booklet as well! I always buy both every year, and make a donation for several of each to go to food banks for those in need.

Interestingly, I don't recall Advent calendars being a big thing in Australia in the 1980s when I was little. We certainly never had them in my family. The first one I ever saw was a pull-out one at the back of a Christmas activity book I had when I was about 6, and that one just told the Nativity story with pictures (no chocolates or other gifts!) behind each flap. Either the concept wasn't as commercialised back then, or my family somehow completely missed it!

Of course, for a lot of people (my entire family included), Christmas IS simply about eating chocolate and other goodies and getting presents and celebrating things you like. I've nothing against that, though — I would rather have people celebrate Christmas in a secular way and have fun, than have it relegated to being an exclusively Christian celebration that those who aren't Christian or aren't religious could easily ignore or shrug off as nothing to do with them. I grew up in a totally secular family and society and Christmas and Easter were just fun times with no deeper meaning. But precisely because they were always part of my life and a positive thing, I quietly became interested in the Christian story behind both, from a young age, even though I didn't know anyone else who took that sort of thing seriously. Underneath all the outward frivolity and fluff, there was a story most people ignored, but that I instinctively knew was much more important. And then (when Mum and I got to the end of The Voyage of the Dawn Treader) I realised it all tied in with the Narnia books that I loved so much too!! I lost that innocent faith (or thought I did) by the time I reached my teens, but I found it again later, better than ever before. And so when I see people celebrating Christmas or Easter in the heavily secularised ways, I just quietly think that some of them, at least, will latch onto that deeper meaning that's always there, whether they know it yet or not...

Sorry to drag this thread a bit off topic! Steering it back to Christmas decorations, I don't have any up at home (I recently moved, am only temporarily in my current flat and haven't had time to buy any new decorations), but we have plenty up at work, including a lovely Christmas tree, so that's all I need at the moment. Christmas is still more about the inward things than the outward to me, although I do enjoy seeing all the lights and wreaths and other decorations when I'm out and about!

@courtenay I just did a post about The Christmas Story In Narnia.

I think there is a devotional book called Advent in Narnia. It might be worth checking out.

I think there is a devotional book called Advent in Narnia. It might be worth checking out.

Oh, there is too — I've just found it on Amazon. Trying to do the "look inside" thing but my internet connection is running slow!! (There's a fault with it that is currently being looked into.)

The book is by Heidi Haverkamp and here's the blurb from Amazon, if anyone else is interested...

“Walking into Advent can be like walking through the wardrobe.”

With its enchanting themes of snow and cold, light and darkness, meals and gifts, temptation and sin, forgiveness and hope―and even an appearance by Father Christmas―C. S. Lewis’sThe Lion, the Witch, and the Wardrobe fits naturally into the Advent season. As the reader seeks a storied king and anticipates the glorious coming of Christmas, these twenty-eight devotions alternate between Scripture and passages from the novel to prompt meditation on Advent themes. Each devotion also includes questions for reflection. The book also provides several resources for churches, including four sessions for small group discussion and ideas for creating a “Narnia Night” for families. Readers will ultimately come to know God better while journeying through Narnia.

(I wonder why 28 devotions when Advent, at least in calendar form, is normally 24 days (1-24 December)? But maybe this one goes beyond Christmas for a few further insights. I'll have a better look at it when technology is being more amenable...)

@courtenay  It might be that December 28th is the day that some churches observed "Feast of the Innocents", where Herod ordered every male child under the age of the 2 to be killed in Bethlehem. It often gets left out of the Christmas story. It's no wonder that Nativity scenes have the wise men at the manger. But they did not come until two years later. And  we don't really know if there were three. It's often the assumption because of the three gifts- gold, frankincense and myrrh.

Anyhow, I think The Advent In Narnia went 28 days because chances are, people are still on Christmas break (winter or summer, depending on where you're at). Kids are out of school, parents and young adults are off-work. So it would most likely give them something to do while still on break.

@courtenay 28 days will cover the full extent of traditional Advent; in Anglican churches it begins four Sundays before Christmas Day. The first falls anywhere between 27 November and 3 December, depending on what day of the week Christmas Day falls on, and is called Advent Sunday. (Rapid calculating, 27-30 November, and 1-24 December, yes that's 28!)

Our church does food boxes for families of low-income or out of work during the holiday season.

I have decorated my tree with assorted decorations from the 1950s to the present day. My parents bought the fine glass balls and other decorations that we loved helping to put on our tree in the early 60s. Over the years I bought some of my own, and received a share of my parents' ones after Dad died.
I've also collected items sent to me or when I travelled, including a wire frame deer from the New Forest, a red cardinal bird from Ontario, a Mary & Joseph pair from Cornwall, Charlie Brown on a world globe from Bronners in Frankenmuth, Michigan, a glass Russian ballerina (sent to me), and a 3D wooden scene from a Christmas market in southern England.

My rooms don't have chains or lots of items, but there are several, including my favourite wreath with a little carol-singer sitting on it, and a cardboard snowman that once held sweets - both of these from my childhood.

(EDIT: moved from my following post, because I had double-posted, sorry!)

Advent in Narnia - is that like Always Winter But Never Christmas?

I guess that could be it.