I've noticed on a few fan sites and a few people on Twitter posting about an Interview that the actor Matthew Goode did on the TV show "This Morning" back in July where he apparently mentioned that his next project was going to be a movie starring alongside Sir Anthony Hopkins.

Given that Sir Anthony's next movie is an adaptation of the stage play "Freud's Last Session", in which Sir Anthony is playing Sigmund Freud,  most people seem to have come to the reasonable conclusion that Matthew Goode will therefore be playing CS Lewis.

I can't find a copy of the interview to confirm it, but for what it's worth IMDB have added Goode to the role of Lewis on the page for that movie.

I'd be pretty stoked if this is accurate casting news - Matthew Goode was my pick to play Professor Kirke in one of the recent casting threads, precisely because i feel he's got that CS Lewisy / Professory vibe to him (also it bugs me that LWW adaptations always cast the Professor as being way too old - he's only supposed to be 52, not 92) 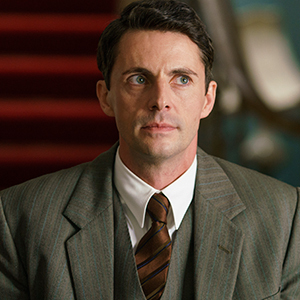 Anyway, for reference, here is a photo of Matthew Goode from a recent Agatha Christie adaptation.

(also it bugs me that LWW adaptations always cast the Professor as being way too old - he's only supposed to be 52, not 92)

That's according to Lewis's timeline of Narnia, which (as far as we know) he didn't complete until after he'd written all the books, and there are several discrepancies between it and the info we're given in the books themselves. I'm pretty sure when LWW adaptations cast the Professor as elderly, they're simply going by Lewis's description of him on the first page of the book:

He himself was a very old man with shaggy white hair which grew over most of his face as well as his head...

I wouldn't count 52 as "very old", and nor would most of us, but at the time Lewis wrote that description, he was only just beginning the series and hadn't yet thought up the Professor's backstory and given him a date of birth. I expect that by the time he wrote The Magician's Nephew, it didn't occur to him that in order for Digory to be "a very old man" by the time we get to 1940, he would have to have been born earlier than the late Victorian era!! The same goes for King Caspian — we hear so much about how terribly old and frail he is before his death in The Silver Chair, and yet going by the famous timeline, he was only 66... (Sorry this is off topic already!

@courtenay to a child of 9 or 10, reading this, 52 is pretty old! The whiskers accentuate it of course.

So for what it's worth, this movie (Freud's Last Session) is supposed to be set on the eve of World War 2, when CS Lewis would have been 41 years old I think.

Matthew Goode is 44 at present which is a pretty good match for Lewis's age.

But back again to the Professor... given that he is a very clear proxy character for Lewis himself, and appears to be based on Lewis's own experience of taking in refugee children during the Blitz, it always seemed logical to me that he should be similar in age to Lewis himself at that time.

Either way, I think Matthew Goode has a really strong reputation for playing Distinguished Gentleman type characters, and so is a great choice for Lewis... (or for the professor 😉 )

You can probably take this news to be confirmed now - the official website for the film's production company (West End Films) has added Matthew Goode to the cast list on their website:

The film is apparently supposed to start shooting sometime this month or next, so likely we should start to see some more news on this going forward.

Probably Max McLean looks the most like C.S. Lewis of any actor portraying him. I haven’t seen Matthew Goode, but I have watched Anthony Hopkins in Shadowlands. The films get Lewis’s mannerisms right, but it is much harder to get his appearance. I think I like all of them, although some are better than others.  They seem to be quite realistic portrayals.

And here is a photo of Matthew Goode from fairly recently (so around 44 years old) in a similar sort of pose. I know we are probably all used to seeing CS Lewis in photos from when he was much older, with the glasses and the balding hair, but I think for a play about a 40/41 year old Lewis this is a pretty decent visual match.

Today it’s hard to find people who talk and act like those who lived long ago. But somehow they still are able to find them for motion picture biographies. I dislike the term “biopics” since the term seems too modern for people who lived a long time ago, and now too many words are already unnecessarily shortened such as “info” for information. If new biographies are made about Lewis the actors will have to speak and act more formally than today. As time goes on it may be harder to find people who can do that effectively. And I think people should say “motion picture biographies” instead of “biopics”.  I’m sure C. S. Lewis would have agreed that English has far too many “coined” words. 🙂

If anyone is interested, The Hollywood Reporter mentioned that this movie is now scheduled to shoot in "Late January 2023", after the film got picked up by Sony Pictures Classic in a distribution deal signed last week... I'd anticipate a theatrical release in time for the 2023/24 Awards Season.

They also confirmed Matthew Goode's casting as C.S. Lewis, just in case there were any lingering doubts on that.