Prior to VDT coming out, one of the things i was most excited about was of finally being able to fufil a childhood dream of obtaining a toy Dawn Treader ship. Back in the days of the BBC TV series i remember making my own Dawn Treaders out of paper, Lego, and just about anything else i could, but they would never be able to beat having something official and permanent. So it was with great disappointment when it became apparent that the VDT movie had almost no associated merchandise, and that no toy Dawn Treader was to be obtained.

But anyway, inspired by StBrianofMinneapolis' post almost a year ago (here) of a Dragon headed ship that was available from Fisher Price, it got me thinking as to the possibility of customising an existing toy into my own version of the Dawn Treader. Unfortunately that Fisher Price toy was not available in the UK, but eventually i came across this toy ship available from Amazon UK a couple of weeks ago (here) which was perhaps even better suited to being restyled as the Dawn Treader.

The ship itself was relatively cheap (a little over £20), and although the quality of the plastic is generally indicative of the price (it did suffer a small, but none too detrimental crack in the cabin during delivery) it did mean i didn't need to be too concerned about immediately painting all over it. The toy seems to have been roughly made in the style of a Playmobil set, though like i said, it didn't seem to be as high-quality. Also unfortunatley it doesn't actually float (the base of the hull is flattened off and has some small rollers for manoeuvring along the carpet). Complaints aside though, the set represents pretty decent value for money, especially since, as i said, the first thing i was going to do with it was paint all over it and potentially mess it up. 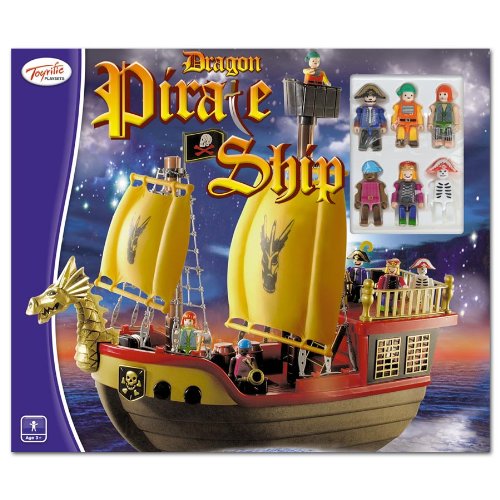 I initally had more elaborate plans for repainting it, perhaps even going for the colour scheme used in the movie, but my lack of any real skills or any specialist equipment meant that i opted for the simplest option which was to paint the sails a pure purple, and to change all the existing red elements of the toy to green. This meant i only had to buy two paint colours (a decent gold paint i imagine could be tricky to obtain) and also that the fairly decent exisitng wood-style colouring of the hull would remain, and that overall green would be the major defining colour of the finished product, which for me is an important element of any Dawn Treader (in many ways, the movie Dawn Treader didn't quite have enough green on it for my tastes).

I ended up using some Humbrol Enamel Gloss paint, the sort that you would usually use to paint an Airfix Model Kit, which was fairly cheap and simple. Painting was though made slightly difficult by the fact that the main body of the ship came slightly more pre-assembled than i would of liked (see photo here) and as the not-so-great quality of the plastic made me slightly fearful of trying to pull it apart for fear it would snap or not go back together again, i had to do my best to paint over the required parts without getting too much paint on the other parts (of which i was mostly successful at

) though i guess i could of used masking tape or some such to avoid getting paint in unwanted parts, but i was lazy so i didn't.

Anyway, after several coats of paint (the sails took quite a few coats to mask the brightness of the yellow plastic and to cover the black design in the middle before the purple really began to shine strongly) i have finaly finished, and have attached a couple of photos below. I may go back at a later date and add some extra details, such as maybe adding a design to the sails (though i do quite like the purity of the plain purple sail) and maybe to get some brown paint to redo the crows nest and perhaps some elements of the deck, but for now i am fairly happy. 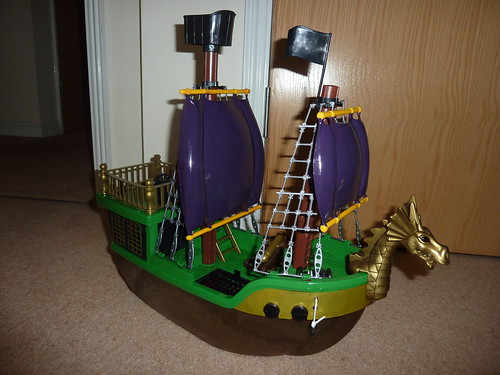 Oh yes, I can see how lazy you were

"It is God who gives happiness; for he is the true wealth of men's souls." — Augustine

That is VERY COOL!

Did you have any trouble with getting the paint to adhere to the plastic?

Thanks for the compliments!

Did you have any trouble with getting the paint to adhere to the plastic?

I was a bit worried about that at first, as i didn't really research suitable paint types beforehand that much, but since i was going with a model kit paint anyway i figured it should be good for most plastics. Hopefully it should prove to be durable enough in the long run.

EDIT: I managed to get hold of my minimal collection of Narnia figures, and although there are perhaps just a fraction too big in terms of scale (they won't fit through the cabin door, but then neither would the original figures it came with), i have to say they work much better with the set than i was anticipating. Actually rather pleased.

Will definitely have to look into getting a few more, certainly a Prince Caspian, and probably a few more Telmarines to populate the crew with. Anyway, here are some shots for reference (the lack of a flash in these photos doesn't really do justice to the purpleness of the sail, but the lighting wasn't quite right for using a flash):

I am also thinking that if i can get a Peter figure, i can use his shield to replace the Skull-and-Crossbones shield that is currently on the bow of the ship (you can see it in one or two of the photos there). I could even use some other shields, accessories and such to jazz up other parts of the ship, but i'll have to see how that goes.

Great! I love it!
That's all the words I have for it

I really should get some new photos of the ship - i've since added a Prince Caspain figure to captain the ship, a couple of Telmarine soldiers to fill out the crew, and also added a slightly larger Reepicheep figure (a promo item from VDT) into the mix. It gives it all a much more Narnian look and feel.

Next time i'm back at home i'll try and get around to doing the flag and painting the crow's nest, so i should be able to take some snaps of my fully crewed vessel.

That would be great to get some more pics. doing the flag is a must that would finish it!

Wonderful, it is a great idea, and I like the color of the green you used better than the ones they used in both Dawn Treader movies. I wonder why I never thought of doing this in addition to making Dawn Treaders out of paper so many times?

I really should get some new photos of the ship - i've since added a Prince Caspain figure to captain the ship, a couple of Telmarine soldiers to fill out the crew, and also added a slightly larger Reepicheep figure (a promo item from VDT) into the mix. It gives it all a much more Narnian look and feel.

Next time i'm back at home i'll try and get around to doing the flag and painting the crow's nest, so i should be able to take some snaps of my fully crewed vessel.

It took me some six months to even think about getting round to doing this, but i have finally done it! Despite how small the parts are they probably caused me more difficulty in painting that the rest of it put together! The crow's nest doesn't entirely match the existing brown colour of the mast, but i am not particuarly bothered by that, and the flag i went with a blue colour, partly to tie-in with the design of Caspian's shield, but also partly just so it was a different colour to the Green and the Purple. Anyway, photos below! 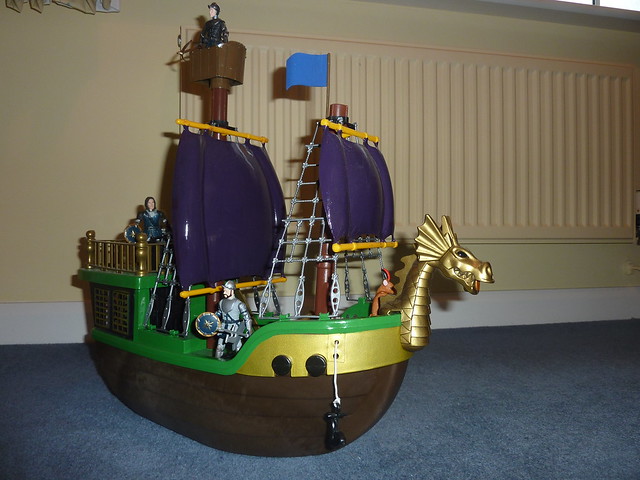 Lovely, thanks so much for sharing! I am thinking about getting my daughter some kind of dragon head ship to serve as a Dawn Treader for her birthday, was thinking about the Mega Bloks King Arthur one because it has a dragon head on the ship's prow and would go along with the Narnia Mega Bloks sets that she already has. This post is inspiring me to do that and to also customize further to make it truly Narnian.

Be Divine Waters"
-The Magician's Nephew