Assuming that nymphs in Narnia are real people instead of special effects in the new adaptation, what should dryad and naiad clothing look like?

I love the idea of drawing a lot of inspiration from ancient Greek design. Check out these styles of dresses below (or click here and here to view larger versions): 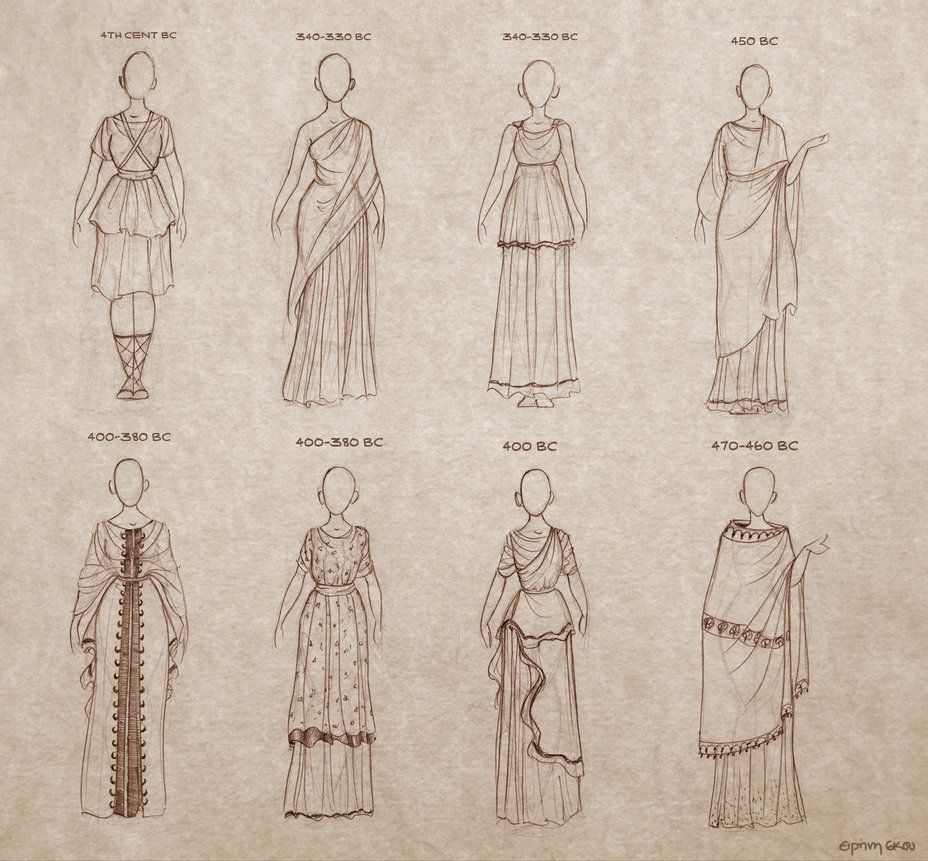 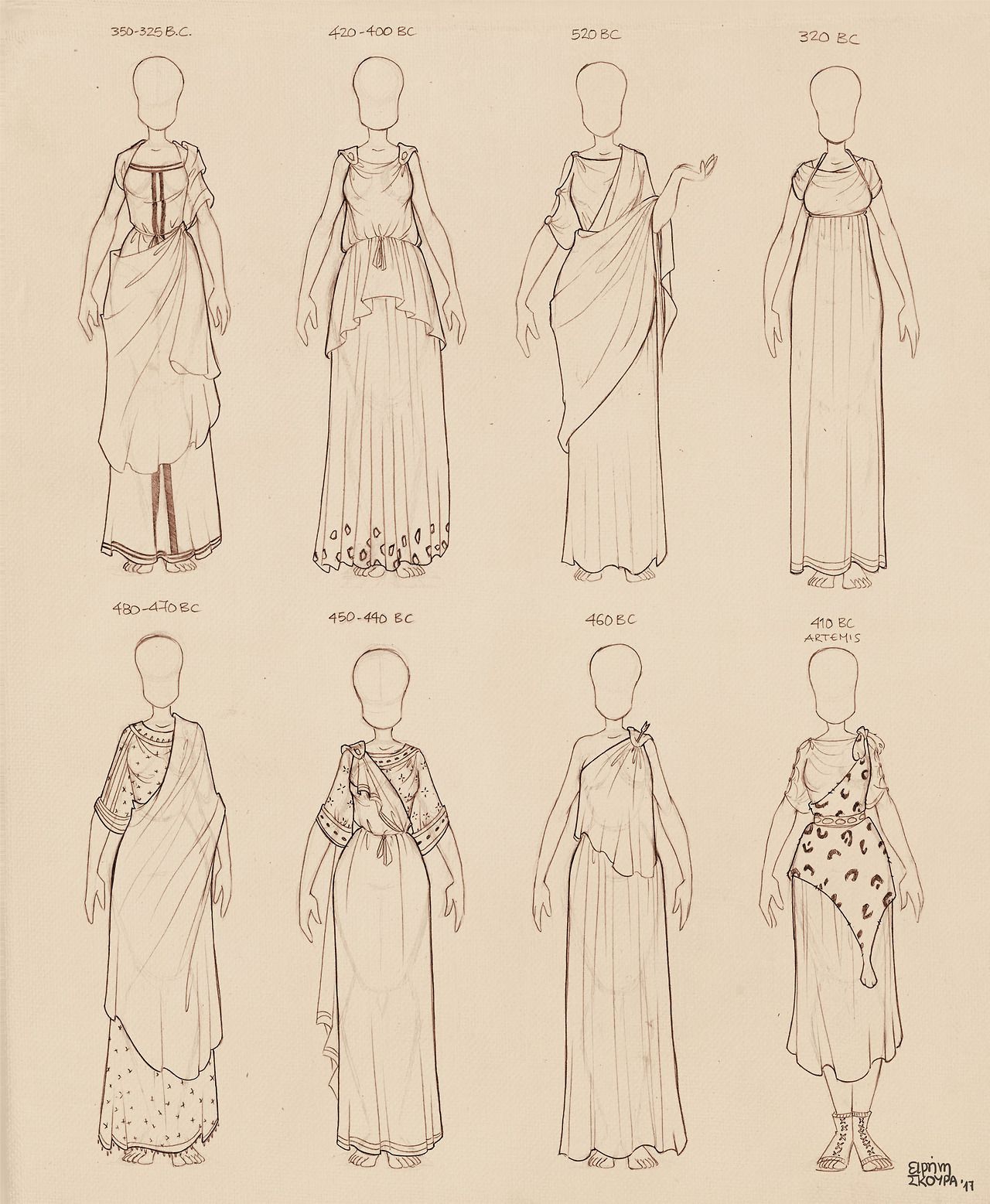 There is so much variety among those silhouettes and I think that would work so well with all of the different types of trees and watery dominions!

I think I'm the only person in the world who liked the dryads in LWW and PC.

That aside, I like the idea of their garments being made of the elements where they dwell. Dryads being very tree-like with leaves and maybe bark looking dresses? Or at the very least, very earthen tones and colors. Didn't Jill describe one looking like she was walking through dirt or something like that? I don't have the book on hand to double check.
Same deal for naiads, probably a really wet look would be appropriate with lilies or seaweed dresses? Something like this, but obviously a bit more decent.

I've always wondered what Lewis imagined tree-folk to look like- he's never very detailed in his descriptions. I was wondering if the "tree-like " appearance could be achieved by giving the skin a bark-like texture, with fingernails made to look like tiny leaves and clothing that is made of leaf-like fabric?
As for "wading through the earth," perhaps they could glide along the ground like ghosts, (adding to their spiritual aspect) with their feet concealed in the earth, and a fine mist swirling at their ankles. (Though perhaps not a GREEN mist.

There's a stylized version of the Gotham City Sirens version of Poison Ivy that I've often found to be very "tree like"--she quite literally creates plant life from her body and in her hands, but it very much flows as part of her body. It always struck me as very dryad. Unfortunately, I can't remember the run, so I'm not finding any scans of it.

As far as going with dresses, I would actually lean more toward more of a lehenga style, with the earth/plantlife/water replacing the hem embroidery, and moving from the movement of earth toward the stillness of the embroidery. That might also give more of the "wading" effect, and would also echo the WW waterfall dresses (not that it's in the same continuity, buuuut.....)

I've always wondered what Lewis imagined tree-folk to look like- he's never very detailed in his descriptions. I was wondering if the "tree-like " appearance could be achieved by giving the skin a bark-like texture, with fingernails made to look like tiny leaves and clothing that is made of leaf-like fabric?

A few passages sprinkled throughout the series come to my mind...

It seems to me that dryads* have a human form that is very similar to a human, and yet there's an ineffable something that makes them like a tree, too. Whatever the differences are, they're subtle. They also seem to vary a lot in appearance, either quite short or quite tall. The Silver Chair mentions them wearing crowns of leaves during the Snow Dance revelry, too.

*There's also hamadryads, who are mentioned in Prince Caspian but not really explained, but according to mythology they are much more closely tied to the tree that they inhabit... I'm thinking they might have more of a human-esque form rather than an actual almost-human form.

Anyway, I do hope that the Dryads' human forms are quite human-looking in Netflix's adaptation, seeing as the sons and daughters of King Frank and Queen Helen married dryads and naiads and wood gods and river gods. I could never imagine kings and queens of Narnia being descended from the "leaf confetti" dryads in Walden's versions.

I came across this nymph costume used in the deleted dancing scene from the LWW movie. It's an interesting concept, I must admit, but it looks a little more stage-style than cinematic: https://www.ebay.com/itm/Chronicles-of-Narnia-Movie-Used-Nymph-Costume/193552953110?hash=item2d10a7af16:g:gB0AAOSw8t5fAOoR

The photos even include a BTS shot of Andrew Adamson reviewing the costume, which is quite intriguing!

Here's a look that I think would be very cool for Naiads: the dresses of Undine in the eponymous fairy tale illustrated by Arthur Rackham, one of Lewis's favorite illustrators.

I love the fluidity of the two dresses and how reflective they are of their watery surroundings!

Undine is a fairy tale about a water spirit that marries a knight to gain a soul. (If that sounds familiar, it was a precursor to Hans Christian Andersen's The Little Mermaid. Or you might remember Jo mentioning the title in Little Women!)

Ooh, very nice — I love Arthur Rackham's illustrations too. Absolute classics. It would be lovely if Netflix could draw a bit of inspiration from those.

The RAHUL MISHRA Couture Spring/Summer 2021 collection has some fabric treatment that reminds me of lichen growing on trees... It's a very neat effect that could give a dryad design some unusual visuals. 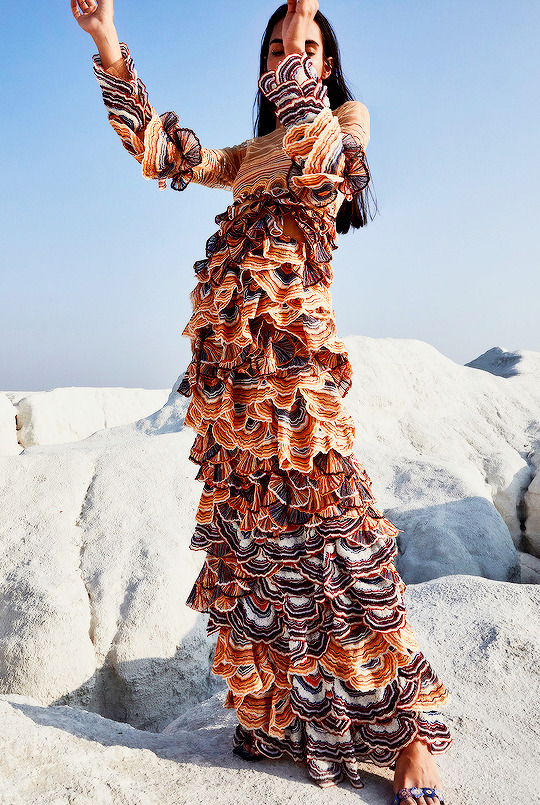 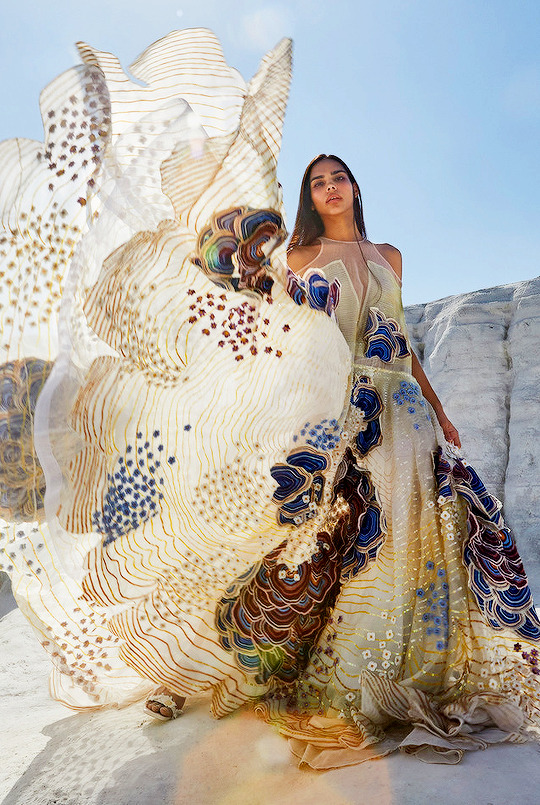 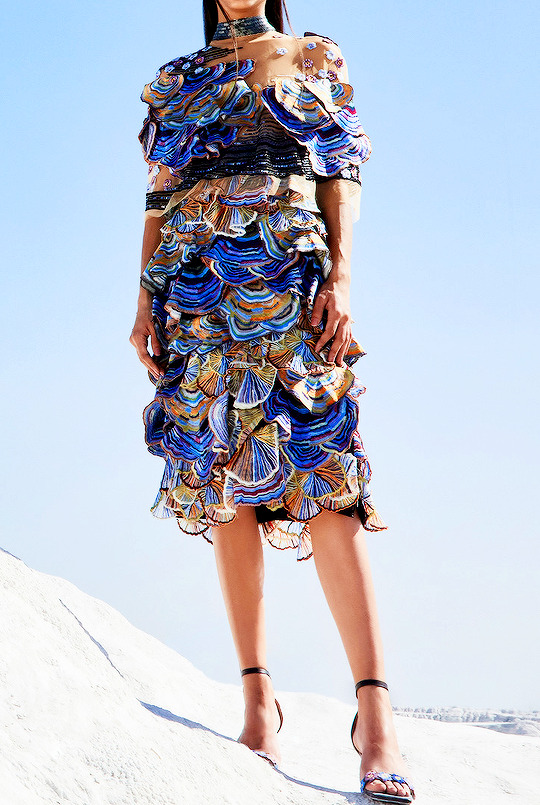 I'm fond of the last one; the blue also reminds me of geodes or butterflies.

Ooh, those are VERY cool, @Mel. I've always loved seeing lichen on nature walks and those would be stunning costumes. And I like the thought about butterflies with the last one; it reminds me of blue butterflies sunning themselves on a log. That would be a really beautiful design for a dryad.

I ran across this Grecian dress a while back and one detail that stood out to me was the texture of the fabric on the dress's... cape? It makes me think of a paper birch. The metal finery is a bit off-brand for dryads, imo, but you could replace that with some vines or greenery. 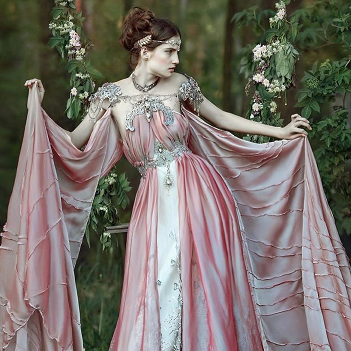 (By contrast, naiads with metallic accessories seem more appropriate to me, at least intuitively... maybe I'm thinking of sunken treasure. And a naiad's got to do something with all of the wishing coins people throw down her well; they make such a mess of the place.

Edit: Ooh, there's no shiny accessories with this one and I'm iffy on the top's design, but I really like the rough "rocky" texture of the main part of the dress and how the tulle skirt seems to pour out at places like water from springs, or over a cliff... tulle might be too modern a material for Narnia, but this design would be really neat for a naiad. 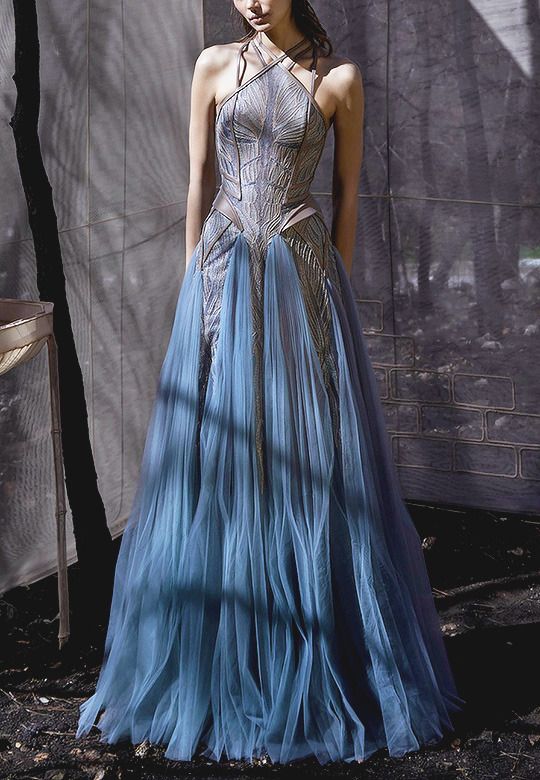