@Jo, that flight departs from the local airport (MSP) but was a wee bit out of my budget.

It may be clear overnight but the eclipse will end shortly after sunrise here, so I probably would have to drive out of town to get a view. And the earliest sunrises of the year occur right around now, so that means getting up really early to leave. I will set the alarm to see if I can catch a glimpse of it from the neighborhood.

Good luck to Jo and our other eclipse watchers!

@fantasia, I'm giving serious thought to seeing that 2023 annular eclipse. (I haven't seen one before and I'm not getting younger, as they say. 😉 )

I can well imagine that flight would cost a 'pretty penny'.

So, it's over, and it was so worth arising at 4:22 to view this eclipse. I had gathered all my stuff together last evening, and decided to drive to the Old Silo, as I had a folding chair and a bag of essentials, plus a cozy blanket in case it was cool. Wish I could've walked, but it was a bit too far with that load. As it turned out, I never sat down, but used the chair instead to place my equipment for ready use. And it was very pleasant out (15C / 59F), so I never needed a sweater nor my blanket.

I arrived at the field at 5:15—barely under a half hour to wait until I saw the first peek of the sun. The dawn was really lovely and although it was clear above me, there were light clouds low on the eastern horizon, but not enough to block the view, whew! I was surprised the dawn's lighting wasn't really any different than usual.

At 5:43, I saw the first tip of the sun, then as it emerged, it was not safe to look at it directly, so I put on my eclipse glasses and ... everything changed! Wow. A beauty of a sight. It gave me the chills (and not because it was comfortably cool outside).

I rigged up photos by placing the eclipse glasses on the camera lens, zooming in and out. I kept taking pictures at the various stages, then finally as only a tiny bite could be seen taken out of the Sun. At 6:37, the eclipse was done. As I drove home in the quiet of the morning, a couple of cars passed me and I wondered if they had any idea what had just occurred in the sky. I felt like I was in another world for awhile.

So cool! Very grateful for clear skies, when our area was expecting the opposite just a few days ago.

Our son lives near Lake Ontario and biked just after 5 a.m. to a suitable spot to view, which allowed him to capture the silhouette of the CN Tower against the eclipse. Here is his shot (from his phone, so not pristine, but still a beauty!): 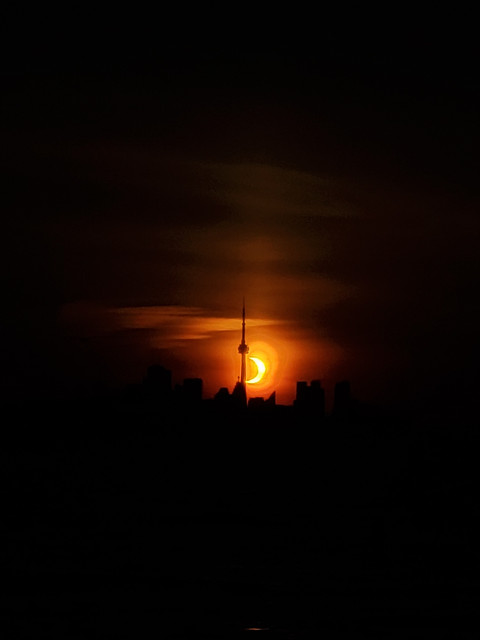 Here is my mini album: https://ibb.co/album/B2YXyp Many photos look mighty similar, but there is a difference with each, whether due to the stage of the eclipse or the colouring. (For some reason, they are in the opposite order of sequence, so click 'AZ' by the title, which should switch 'em.)

So glad you got to enjoy the eclipse, Jo! You got some wonderful pictures. The first captures the excitement and anticipation of what is to come, and the pair showing the sun rising are very pretty. And the one with the CN Tower and skyline gives some perspective to the view.

The temperature sounds pleasant too.. while it was clear this morning, it never got below a humid 75F/24C or so. I was awake for the eclipse but it was so low that trees in the foreground kept me from seeing anything. Local TV stations showed the view from the airport, along with other views from places that saw a deeper eclipse.

S&T blogger Bob King has written a report of his experiences aboard the charter flight that flew from Minneapolis over southwest Ontario to see the annular phase. It sounds like a wonderful experience.

It’s great that you could watch the full eclipse from your location.

I saw some pictures on my local TV station’s website. There was only a partial eclipse visible here in Michigan. I remember that many years ago that we had an annular eclipse visible here in Michigan. It was on a clear day in February, which was quite unusual here. We projected the sun’s image onto white paper taped to the top of a shoebox.  I held the shoebox lid a short distance from my telescope’s eyepiece. This was a pretty safe way to watch an eclipse. I do not recommend using filters that screw in the eyepiece.  In fact I don’t think those filters are made anymore. The sun can damage your vision.  There are also filters that cover the large lens at the end of the telescope, but I think the projection method is safer. 🙂

@narnian78, I remember making and using the shoebox viewer years ago for a solar eclipse. It worked well!

One has to be careful in purchasing eclipse glasses as some so-called brands are not trustworthy, but there are others that are very reliable (I have used Thousand Oaks Optical). Still, once we receive the glasses, we always check for any pinpoint of a tear, to ensure not a spot of sunlight can get through, as well as each time after we use them. Our son has a telescope, and is looking to eventually purchase a well-made solar filter for it. He already has a moon filter: looking at a full brilliant Moon through this is breath-taking!

S&T blogger Bob King has written a report of his experiences aboard the charter flight that flew from Minneapolis over southwest Ontario to see the annular phase. It sounds like a wonderful experience.

This was such an interesting read! As King mentions in the article, I, too, could not get over the brilliance of the Sun, 'though it was probably over 70% covered. Glad you were able to see the eclipse at least on the TV, stargazer. No doubt what they showed were some of the best!

Which is better—reflector or refractor telescopes? I have a small reflector telescope with a five inch mirror. I prefer the reflector design. But then some people have said that when you look through that kind of telescope you are seeing a reflection of something instead of looking directly at the star or planet through lenses. It’s not a big issue with me. Some reflector telescopes are huge, but that would be impractical for me since I live in an apartment.  If you have to move the telescope it’s better to have a small one.

That's a good question, @Narnian78. Each type has its advantages. Reflectors have the size advantage, dollar for dollar, since only one mirror surface has to be ground to the right specifications, whereas refractors require more.

You've hit upon a good solution - the best scope is the one that gets used, and that means portability.

I also wouldn't overlook the value of a good pair of binoculars. 10x50 can show things like the bands and Galilean satellites of Jupiter, and satisfying views of objects like the Pleiades and the Beehive.

For those considering a purchase, Sky and Telescope offers a variety of articles.

I have an old pair of binoculars too. They are 10 X 50 and seem to be okay for viewing objects such as the Pleiades,  Hyades, and the bright clusters. But with the light pollution even in rural areas it is hard to find fainter objects than these.  We had much better, darker skies in this area around forty or fifty years ago.

When I was a teenager I had a reflector telescope which I upgraded by buying new eyepieces for it. The telescope I have now is much better, but I always liked the design with mirrors better since I feel more comfortable looking down into the tube.  Also, reflector telescopes tend to be much lower in price unless you are content with a very small refractor.  The planets (especially Jupiter and Saturn) , look very nice in reflectors,  and I think there is less eye strain in viewing them for long periods of time.

I love looking at old astronomy books. They bring back memories of the better skies that we had in our area decades ago. I bought several many years ago when they were selling them out at the Chaffee planetarium in Grand Rapids (the planetarium was named for the astronaut who tragically died in the Apollo fire). I have kept the old books for years even though the information in them is now dated. It still is very enjoyable to remember those times.:)