Forums
General Narnia Disc...
The Man Behind the ...
At this very moment...

I am sitting in one of my most favorite places on the planet - the 'Rabbit Room', the room within the Eagle and Child pub in Oxford, home of the Inklings!

Oxford is one of those places that really should be on every UK itinerary. Have you been to Christchurch College and seen the refectory there? The stained glass windows include one with a reference to Alice's White Rabbit. Lewis Carroll seems to be very well regarded in Oxford. Are there any specifically mentions of C.S.Lewis in Oxford, apart from that pub?

Today, 1st August, follows the 100th anniversary of Passchendaele in Belgium - the third battle of Ypres. The Inklings fought in Flanders, but 100 years ago, C.S.Lewis would have been in Army Training. C.S.Lewis was wounded on 15th April, 1918, and was discharged from the army in December of that year.

I quite loved visiting the Eagle and Child, myself. Their spiced cider was quite good, but I've a feeling that is only available during the Christmas season.

The University has some Lewis related stuff, if I remember correctly. It was a bit of a whirlwind when I was there, as I was visiting a friend, her mum was also arriving, and I was moving out of the continent less than a week later.

The Kilns, Lewis' home, is also nearby, if I recall correctly? I think they've turned it into a museum, but I haven't been able to go in.

Fun facts, wagga! It would be cool to have a calendar of those sorts of things for the Inklings.

The Kilns isn't a museum, more like a study centre in a way. Small and private, so when I visited that 'hallowed ground' I didn't go beyond taking photos from outside the gate.

I loved Oxford too.

(I have just amended the thread title, so it will cover various things about being in Oxford)

Oh my goodness, Bree, that is one of my life dreams—to sit and revel in that back iconic Rabbit Room at the 'Bird and Baby'! ♥ Did being there almost feel surreal for you? How wonderful you could visit.

As for the Kilns, my ideal job is to be curator there.

But since that will never happen

I'd also love to take a walking tour of Oxford, focusing on CSL's haunts. I have not yet thoroughly read through the description, but surely hope Addison's Walk is included. ♥

I enjoy browsing through the "Legacy of CSL" site periodically. Here it stresses the following concerning a tour (under "Kilns Etiquette"):
"In the interest of ensuring a quality study experience for all in residence at The Kilns, visitors are respectfully asked to observe the fact that The Kilns is not a museum."

Hope no-one minds me reviving another older thread, but I was wondering if there was one on Lewis-related sites in Oxford and if anyone else here has been there!

I've visited Oxford several times since moving to the UK — it's one of my favourite smaller cities in England, with lots of beautiful architecture and of course fascinating history, as it feels like just about everyone who is anyone was a student or teacher at Oxford or is otherwise associated with the place! (Either that or Cambridge, but for some reason more of my favourite historical figures are connected with Oxford. Well, C.S. Lewis also taught at Cambridge towards the end of his career, but Oxford was his home base for most of his life.)

Anyway, my favourite thing about Oxford in particular is the Lewis connection, and a few years ago I had the privilege of a guided tour of The Kilns like others in this thread have mentioned! It really, really is worth going to if you can get there. Seeing Lewis's own home certainly gave me an even deeper appreciation of his life, the struggles he went through at times, the people he loved and the things that were important to him. It's lovely, too, that the house is still used as a residence for scholars, though I was glad I went during the summer break, as that meant nearly all the rooms were unoccupied and open to visitors.

More information here on the tour — you do need to book in advance, but I contacted them only a few days ahead and they were happy to take me: Tour C.S. Lewis's Home

I've also got a few photos from that trip, which I'll post separately.

These are some photos I took during my Lewis-inspired visit to Oxford in May 2016: 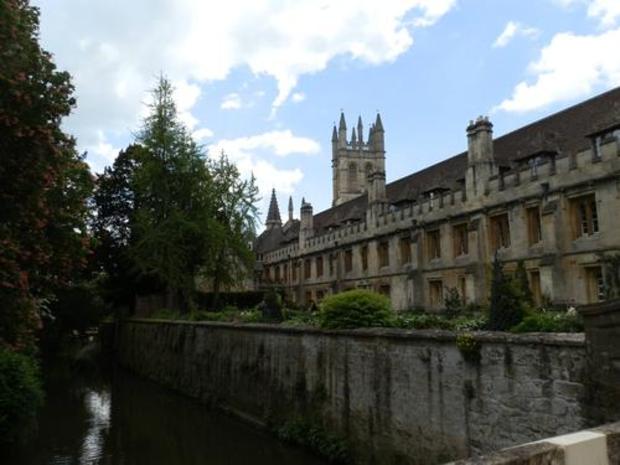 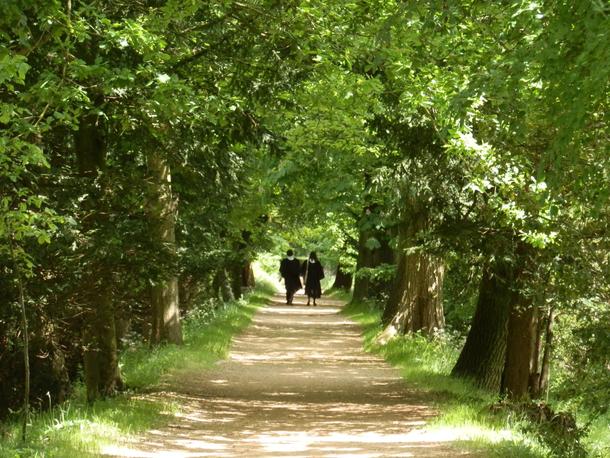 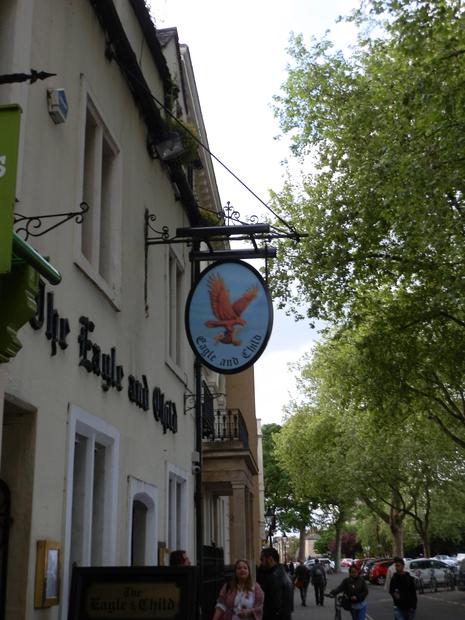 The "Bird and Baby"! (Yes, I've sat in the room where the Inklings used to meet and wished I could have been a fly on the wall... 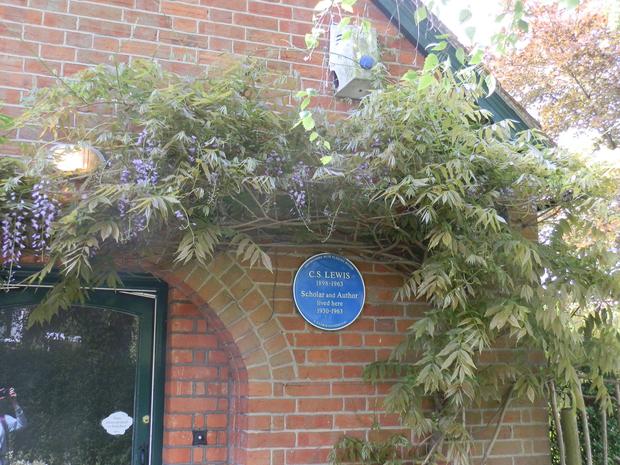 Exterior of The Kilns with blue plaque 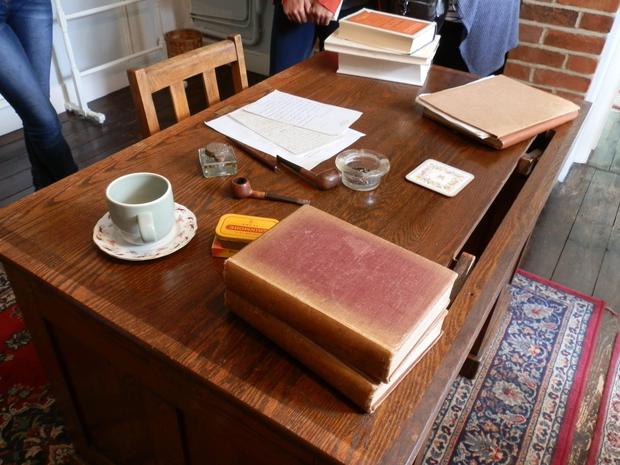 Lewis's study at The Kilns (the furniture isn't original, but through photos and memories of people who knew the house in Lewis's time, they've recreated everything as close as possible to how it was then)

*Shrieks of an astounded Lewis fanboy*

OH MY GOODNESS! You're so lucky! Those are really great pictures. I've only seen the Kilns through a an old documentary short about Lewis; it looks like the place has come a long way since then. (Funnily enough, Douglas Gresham, who was conducting the video tour of the house, remarked that the slightly disorderly way the students had arranged things inside was actually somewhat reminiscent of the way Jack kept the house.

)
Good to see it restored and looking good! And glad you got to visit!
It's also cool to see a medieval college still in business!!

I managed to join a tour group at the last minute, just a few months ago. It was really special to be there.
Courtenay, I can't see your photos. (I have some anyway!)

Ooh, sorry, I don't know why that would be — I can see them and obviously so could Cleander. Glad to hear you've been there in person too, anyway! Coracle, what browser are you using? I've found Firefox to give a number of problems (including seeing pictures) which I haven't had in Chrome.

The photos are visible today! And they are great - thanks, Cleander! EDIT: Oops, thanks, Courtenay!

Meanwhile in Oxford, scholars live for weeks or months at The Kilns, visitors come and take photos, and life goes on. One thing that really struck me was how ordinary it was - very little that seemed extraordinary. But as I commented in my blog afterwards, it was the people who lived there who made it special.

The photos are visible today! And they are great - thanks, Cleander!

Oh, glad you can see them now.

I was especially happy with the one of Addison's Walk — the girl and guy in their academic robes just happened to be walking ahead of me in the distance as I looked down the path and it was the perfect shot!

Meanwhile in Oxford, scholars live for weeks or months at The Kilns, visitors come and take photos, and life goes on. One thing that really struck me was how ordinary it was - very little that seemed extraordinary. But as I commented in my blog afterwards, it was the people who lived there who made it special.

Yes, that's what I felt too. It's quite an ordinary, large, very lived-in house, but that must have been just the kind of place it was when Lewis lived there. (And possibly tidier these days, too — I remember hearing somewhere, possibly during the tour, that before Joy moved in and sorted them out, Lewis and his brother Warnie generally kept the place in such a mess that some of their friends referred to it as "The Midden"!

) I'd be very interested to read your blog post about it, Coracle, if you wouldn't mind sharing it.

Sorry this took so long.
My blog is on:

The post is from August or September 2019, and its called 'Visiting The House'.
It has one or two photos.

This year it is 57 years since C S Lewis died. He was 64, a week before his birthday.