Reaction to Tash in the Stable

Since there's be discussion about Tash lately, in the threads Hopes and Fears of What Will Happen in Narnia Movies and Jadis, Tash, and Lawful Prey?, I think it would be a good time to talk about our reactions to Tash in the stable.

For a moment or two Tirian did not know where he was or even who he was. Then he steadied himself, blinked, and looked around. It was not dark inside the Stable, as he had expected. He was in strong light: that was why he was blinking.

He turned to look at Rishda Tarkaan, but Rishda was not looking at him. Rishda gave a great wail and pointed; then he put his hands before his face and fell flat, face downwards on the ground. Tirian looked in the direction where the Tarkaan had pointed. And then he understood.

A terrible figure was coming towards them. It was far smaller than the shape they had seen from the Tower, though still much bigger than a man, and it was the same. It had a vulture's head and four arms. Its beak was open and its eyes blazed. A croaking voice came from its beak.

"Thou hast called me into Narnia, Rishda Tarkaan. Here I am. What hast thou to say?"

But the Tarkaan neither lifted his face from the ground nor said a word. He was shaking like a man with a bad hiccup. He was brave enough in battle: but half his courage had left him earlier that night when he first began to suspect that there might be a real Tash. The rest of it had left him now.

With a sudden jerk—like a hen stooping to pick up a worm—Tash pounced on the miserable Rishda and tucked him under the upper of his two left arms. Then Tash turned his head sideways to fix Tirian with one of his terrible eyes: for of course, having a bird's head, he couldn't look at you straight.

But immediately, from behind Tash, strong and calm as the summer sea, a voice said:

"Begone, Monster, and take your lawful prey to your own place: in the name of Aslan and Aslan's great Father, the Emperor-over-sea."

The hideous creature vanished, with the Tarkaan still under its arm 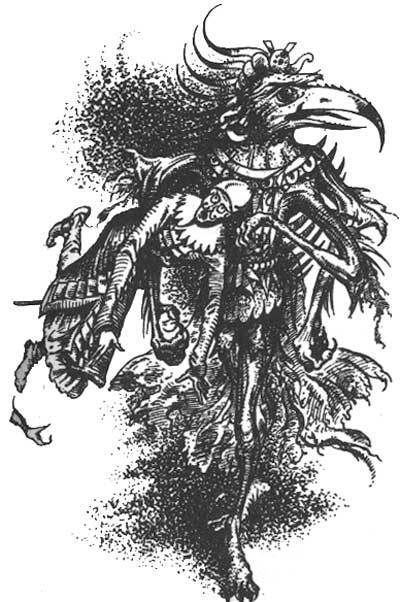 For my reaction, I wasn't traumatized by it. I was about ten when I was introduced to the series. I think I would've been traumatized if I've been younger. When I read it for the first time, at that moment, I was like, "What is that thing?" I'm sure this moment would traumatized a child for life (maybe some).

What were your reactions to Tash in the stable?

I'm not into horror fiction, but I feel like I've always enjoyed the scariness of Tash since I've first read about him. (Well, technically, I first read about him in The Horse and his Boy, where his name is first mentioned, and I wasn't scared of him then, but you guys know what I mean.

) I think he's an awesomely creepy bad guy. That said, I'm not particularly interested in him being expanded on in adaptations, as we were talking about in General Movie Discussion because it would require rewriting his character to a large extent and, anyway, familiarity breeds contempt (though I am willing to listen with an open mind to specific ideas on how this could be done.) As intriguing as he is, the more we'd learn about him, the less freaky he'd become.

For my reaction, I wasn't traumatized by it. I was about ten when I was introduced to the series. I think I would've been traumatized if I've been younger. When I read it for the first time, at that moment, I was like, "What is that thing?" I'm sure this moment would traumatized a child for life (maybe some).

What were your reactions to Tash in the stable?

It's funny you mention being traumatized by a character in a book - for me, that was the White Witch (especially after reading the Magician's Nephew).

My reaction to Tash showing up was more of a "what the...?  He's real?"  It just seemed so random.  It didn't make sense.  Like if he were real, why are we only seeing him now?  I thought the picture was cool, but I didn't understand it.  I was excited to see what would happen next, but I didn't get why Tash would only show up now.  Might as well have been Dracula, the Stay-Puft Marshmallow Man, the Shredder, or any other villain from any other story just randomly popping up because it's the end of the world.  I seriously need to re-read the books and see if I can make more sense of it as an adult.

But I think that's just because of what I was like as a kid (and maybe still am):  Very literal.  Like in VDT when Aslan said he was in our world too, I thought of how horribly we would treat a talking lion in our world.  I imagined them trying to put him in a circus or something!  Then the line about, there I go by another name, just seemed weird.  I didn't get it.  Even after I became a Christian (a couple years later), I never made the connection between Aslan and Jesus until I learned what symbolism was. 😀

This post was modified 2 days ago 2 times by Geekicheep

I was 18, and reading the book for the first time, I was uncomfortable with what was happening in the story, so I don't remember how I felt, but I suspect I was a bit shocked. I had seen drawings and photos of 'gods' from other countries, which probably softened my shock.
Happily for me, within a few years this book became my go-to cheer-up book on wet Sunday afternoons,

I wonder how many of a child after reading this scene and seeing the picture would actually remember.

While Rishda is a cruel man, I think we could almost sympathize with him when he’s taken away by Tash. He has called on Tash, though doesn’t believe in him. And he was in for a rude awakening when Tash shows ups. I actually kind of feel bad for Rishda. I think I was in middle school the first time I read The Last Battle. I don't remember Tash suddenly appearing in the stable scaring me. Like @geekicheep, I remember being shocked that Tash actually showed and thinking "wait, he's real?!" And then I remember thinking, "oh boy, aren't they (meaning Rishda and all the others with him) going to be surprised."

Suddenly having Tash be real made me realize that even though this is the last book in the Chronicles, chronologically, and I've have six other books to explore Narnia and the surrounding countries, there is still apparently things about this land that I don't know. As a reader and Narnia lover, it made me really excited that Lewis was still able to add new, surprising, and exciting elements to the Chronicles.

@narnianrose I wonder how Netflix is going to pull this off.  It's as Rishda was saying, "Oh, the great god Tash and Aslan and blah blah." Then all of a sudden, Tash appears.

It almost makes me think of Smaug in The Hobbit or the raptors in Jurassic Park. You hear about Smaug terrorizing Dale and the Lonely Mountains but don't actually see him until later. You hear about the raptors, then midway through, they make a sudden appearance.